Dumbstruck: A Cultural History of Ventriloquism

Dumbstruck
A Cultural History of Ventriloquism 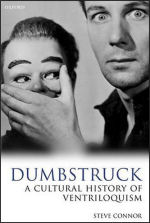 Dumbstruck: A Cultural History of Ventriloquism was published by Oxford University Press in October 2000.

This site makes available the Dumbstruck Archive, of texts and images relating to the history of ventriloquism.

Order the book from Amazon or Oxford University Press.

Read reviews
Stuart Jeffries in the Guardian
Jonathan Rée in the London Review of Books
Read Chapter One, ‘What I Say Goes’.
Interview with Massimo Gezzi.
Interview with Enzo Mansueto, Rodeo, 43 (2008): 66.

By `ventriloquism’, I mean, not merely the practice of making one’s voice appear to proceed from elsewhere – although I am, indeed, interested in the history of this particular form of entertainment or illusion. I use the word to designate all of the many forms which may be taken by sourceless, or dissociated or displaced voices, along with the various explications of such voices and ascriptions of source to them. This makes for an exhilaratingly, perhaps even a nerve-wrackingly large subject, which has no very good reason to exclude such disparate and historically far-flung examples as the following, many (but not all) of which are discussed in Dumbstruck:

I suggest that the dissociated voice is a recurrent source of excess, menace and awe. Because it is a category of excess, a figure of nonfigurability, it has no one meaning. No conclusions can be drawn regarding the nature of the ventriloquial voice, because its essence is to be against nature. My concern is rather with the recurrent shape of the question asked and answered by the dissociated voice. Nor is the ventriloquial voice pure exorbitance or disruption; like the neurotic symptom, it is both wound and cure, enigma and explication, trauma and therapy.

The dissociations and resituations of the voice are always a matter of power. Firstly, the dissociated voice of ventriloquial fantasy mediates between the body and language, which is to say also between the body and culture. The variability of the voice’s origin, whether magically detached from the body, or erupting from illegitimate orifices, means that the ventriloquial voice is both an attempt to imagine and pit the the speech of the body against the speech of culture, and an attempt to control that illegitimate speech, to draw it into discourse. It is for this reason that the ventriloquial voice is associated both with challenges to political authority, and with their reassertion. For the voice is the mark both of the self’s presence to and its estrangement from itself; the ventriloquial voice enacts the strangeness of the self’s self-presence.

Secondly, the voice is crucial to the process whereby, in modern societies, political questions have come to be focused in the question of the subject, and more specifically its threefold articulation of self, socius and voice. The modern subject who must learn to internalise power, gives itself the law through the medium of the voice, of the system of self-speaking and self-overhearing that Jacques Derrida has named `s’entendre parler’. In a mirror image of this process, the state or the socius enacts its authority through the process of speaking for and through other subjects. Ventriloquism is both the guarantee of this system and a threat to it. Nowhere is this better enacted than in Charles Brockden Brown’s Wieland, a novel in which a sinister ventriloquist wreaks havoc in a rational community in Pennsylvania. The question that the novel asks is `where does the authoritative voice come from, and whence does it derive its authority?’. It is the question that is both anxiously asked and prematurely answered in the Declaration of Independence of a decade previously. The declaration declares that it speaks for and as the independent nation; its authority lies in the fact that it declares itself, declares its declaration. But, since the declaration also speaks on behalf of those it represents, it must also declare that its authority comes from elsewhere, from some source (the people) that is not known and present at the moment of declaration. Ventriloquism is thus both the legitimating glue of the new republic inaugurated by the Declaration of Indpendence, as it comes to be the binding principle of modern democratic states; and the solvent of that authority, insofar as the mobility of the voice always puts in doubt its authoritative origin.

I have published a number of essays which explore other aspects of ventriloquism:

`The Modern Auditory I’ in Rewriting the Self: Histories From the Renaissance to the Present, ed. Roy Porter (London: Routledge, 1997), pp. 203-23

Noise, a series of radio pieces which I wrote and presented was transmitted February 24-28, 1997 on BBC Radio 3.

Phonophobia: The Dumb Devil of Stammering, a talk given at Giving Voice conference, University of Aberystwyth, 8 April, 2006

Other essays on sound and voice can be found in Seeing to Sound: On Sound, Music and Voice, a collection of my web essays.